HOLLYWOOD, Fla., June 27, 2022/ As part of a legendary moment in music history, multi-Grammy award winning artist, Elton John, added his iconic Gucci suit to the renowned Hard Rock memorabilia collection at the Old Park Lane Hard Rock where he also gave an intimate performance during the festival. The signature Gucci outfit was exchanged for Elton’s legendary Rocketman Dodger’s uniform which was previously on display at Hard Rock Cafe. The suit is a shawl lapel jacket with piping trim and a floral embroidery made of luxury thread and sequins on black wool mohair. It was worn throughout the Farewell Yellow Brick Road Tour, and now joins Hard Rock’s collection of over 86,000 iconic music and entertainment pieces worldwide. 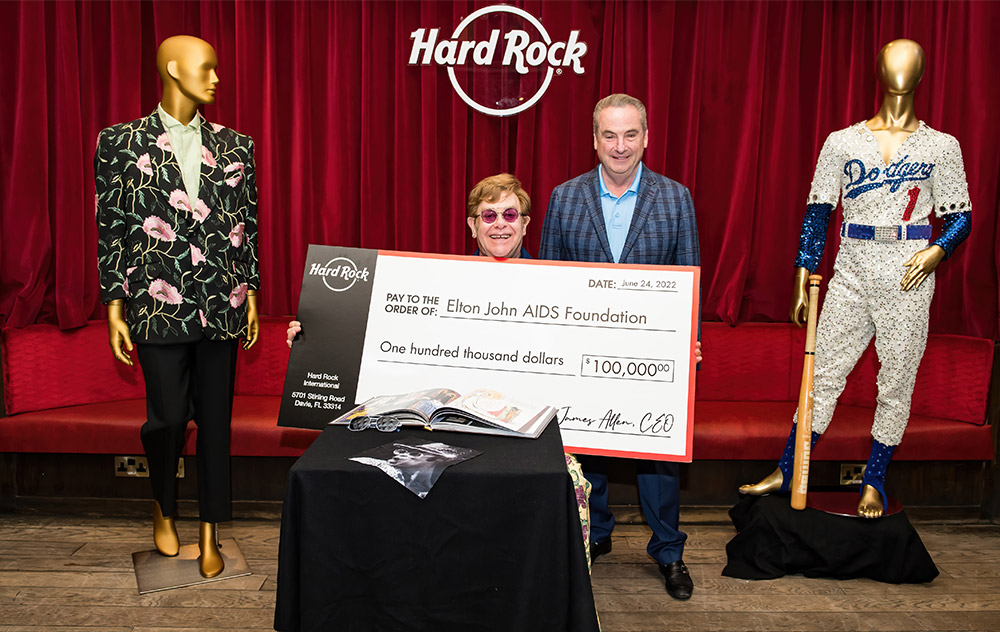 “As Hard Rock celebrates its 50th year anniversary and Elton celebrates 50 years of touring, we’re honored to mark this occasion by adding a fitting piece of memorabilia from an artist we’ve had the immense pleasure of working with throughout the years,” said Keith Sheldon, President of Entertainment for Hard Rock International. “The iconic Gucci outfit that Elton has gifted to us will memorialize these special moments in time, while allowing Hard Rock to tell and celebrate artist stories for generations to come.”

Hard Rock’s vast memorabilia collection includes authentic and one-of-a-kind artifacts celebrating all genres of music including John Lennon’s original hand-written “Imagine” song lyrics, pieces from contemporary artists such as Billie Eilish and Ed Sheeran, and other artifacts from the Rocketman, Elton John.  Its music memorabilia pieces are a core reflection of the brand DNA and a distinct staple of the visual décor around every Hard Rock property.

About Hard Rock®:
Hard Rock International (HRI)  is one of the most globally recognized companies with venues in over 70 countries spanning 265 locations that include owned/licensed or managed Rock Shops®, Live Performance Venues and Cafes. HRI also launched a joint venture named Hard Rock Digital in 2020, an online sportsbook, retail sportsbook and internet gaming platform. Beginning with an Eric Clapton guitar, Hard Rock owns the world’s largest and most valuable collection of authentic music memorabilia at more than 86,000 pieces, which are displayed at its locations around the globe. In 2022, Hard Rock was honored as one of Forbes Magazine’s Best Employers for Diversity and a Top Large Employer in the Travel & Leisure, Gaming, and Entertainment Industry. Deloitte Private and The Wall Street Journal also designated Hard Rock as a U.S. Best Managed Company for the second year in a row in 2022. In 2021, Hard Rock was ranked top performing hotel brand in J.D. Power’s North America Hotel Guest Satisfaction Study for the third consecutive year and named Forbes Magazine’s Top Employers for Women. The brand is owned by HRI parent entity The Seminole Tribe of Florida. For more information on Hard Rock International, visit www.hardrock.com or shop.hardrock.com.

About Elton John:
Elton’s career achievements to date are unsurpassed in their breadth and longevity. Elton is one of the top-selling solo artists of all time. In the UK and US charts alone he has 1 diamond, 32 platinum or multi-platinum, and 21 gold albums as well as over 70 Top 40 hits. He has sold more than 300 million records worldwide.

He holds the record for the biggest-selling single of all time, “Candle in the Wind 1997”, which sold over 33 million copies. Released in 2017 ‘Diamonds’ the Ultimate Greatest Hits album, became Elton’s 40th UK Top 40 album and has spent over 200 consecutive weeks in the top 75 of the UK album charts, over 110 of these in the top 20. This release celebrated 50 years of his songwriting partnership with Bernie Taupin. August 2018 saw Elton named as the most successful male solo artist in Billboard Hot 100 chart history, having logged 67 entries, including nine No. 1s and 27 Top 10s. ‘The Lockdown Sessions’, an album of collaborations recorded during the COVID-19 Pandemic, was released in October 2021 and went straight to number 1 in the UK album Charts, becoming Elton’s 8th UK number 1 album in the process. Its lead single “Cold Heart (PNAU Remix) with Dua Lipa” became a bona fide global hit, reaching number 1 in the UK and Australian singles charts. Its success meant that Elton became the first ever solo artist to score a UK Top 10 hit single in 6 consecutive decades. In America, he holds the record for longest span between Billboard top 40 hits at 50 years.

Elton announced the ‘Farewell Yellow Brick Road’ tour at New York’s Gotham Hall in January 2018. Encompassing 5 continents, and over 350 dates, this 5-year-long tour started in September 2018 and marks his retirement from touring after more than 50 years on the road. In 2019 it was named Billboard’s Top Rock Tour and Pollstar’s Major Tour Of The Year. To date, Elton has delivered more than 4,000 performances in more than 80 countries since launching his first tour in 1970. 2019 also saw the release of ‘Rocketman’ and global bestselling autobiography, ‘ME’. An epic fantasy musical motion picture of Elton’s life, ‘Rocketman’ has been a commercial and critical hit, taking close to $200m at the box office. It has won an Oscar, two Golden Globe Awards and a Critics’ Choice Award and garnered BAFTA nominations. Its soundtrack was also nominated for a GRAMMY Award.

Among the many awards and honours bestowed upon him are six GRAMMYs, including a GRAMMY Legend award, a Tony and two Oscars, a Best British Male Artist BRIT Award, induction into the Rock and Roll Hall of Fame and the Songwriters Hall of Fame, the Kennedy Center Honor, Legend of Live Award, 13 Ivor Novello Awards between 1973 and 2001 and a knighthood from HM Queen Elizabeth II for “services to music and charitable services”.

In 1992, Elton established the Elton John AIDS Foundation, which today is one of the leading non-profit HIV/AIDS organizations and has raised over $515 million to date in the global fight against HIV/AIDS. In June 2019 President Emmanuel Macron presented Elton the Légion d’honneur, France’s highest award, for his lifetime contribution to the arts and the fight against HIV/AIDS. Elton was awarded the Companion of Honour in the 2021 New Year Honours list. The highest acknowledgement in the list, Elton became one of only 64 people to hold the honour. September 2019 saw The Royal Mail issue a set of 12 stamps as a tribute to Elton being one of the most popular and enduring music artists of all time. Elton was only the second individual music artist to be featured in a dedicated stamp issue. In July 2020 the Royal Mint released an Elton John commemorative coin, the second in their music legends series to celebrate ‘one of the most successful and enduring artists of all time’. Always a tireless champion of new artists, Elton has been a leading industry voice in lobbying the government for young artists visa-free touring rights in Europe post Brexit.