The grand entrance, which features gold and glass design elements along with two curved escalators, is part of the property’s ongoing $700 million expansion, which will be completed in the fall. A grand opening has been scheduled for October 3.

As part of the grand opening weekend, country artist Keith Urban will perform on Friday, October 4, in the property’s new 1,500-seat Hard Rock Event Center. Tickets are on sale now via Ticketmaster.

“We’re honored to have Elvis’s priceless piano on permanent display here at Seminole Hard Rock Hotel & Casino Tampa,” said Jim Allen, Hard Rock International Chairman and Seminole Gaming CEO. “Hard Rock has such a deep connection to music history, so it’s fitting that this fantastic piece of memorabilia is here at one of the most successful casino properties in the world.”

Presley’s grand piano was played by the “King of Rock and Roll” inside a music room at his Graceland home in Memphis, Tennessee. He originally purchased the piano for his mother in 1955 and installed it in his new home on Audobon Street. The piano was placed into storage for 10 years after Presley’s mother’s death in 1958, until Priscilla Presley decided to adorn the piano in 24-karat gold-leaf finish as a Christmas gift and in celebration of the couple’s first wedding anniversary.

Hard Rock International acquired the piano as its 80,000th piece of memorabilia.

The Elvis piano joins more than 500 other pieces of the most evocative and valuable pieces of music memorabilia at Seminole Hard Rock Tampa, including such fan favorites as The Beatles, Bob Dylan, Janis Joplin and many more. A sampling of these pieces can be seen through the self-guided memorabilia Rock Walk tour on the Mezzanine Level of the property. 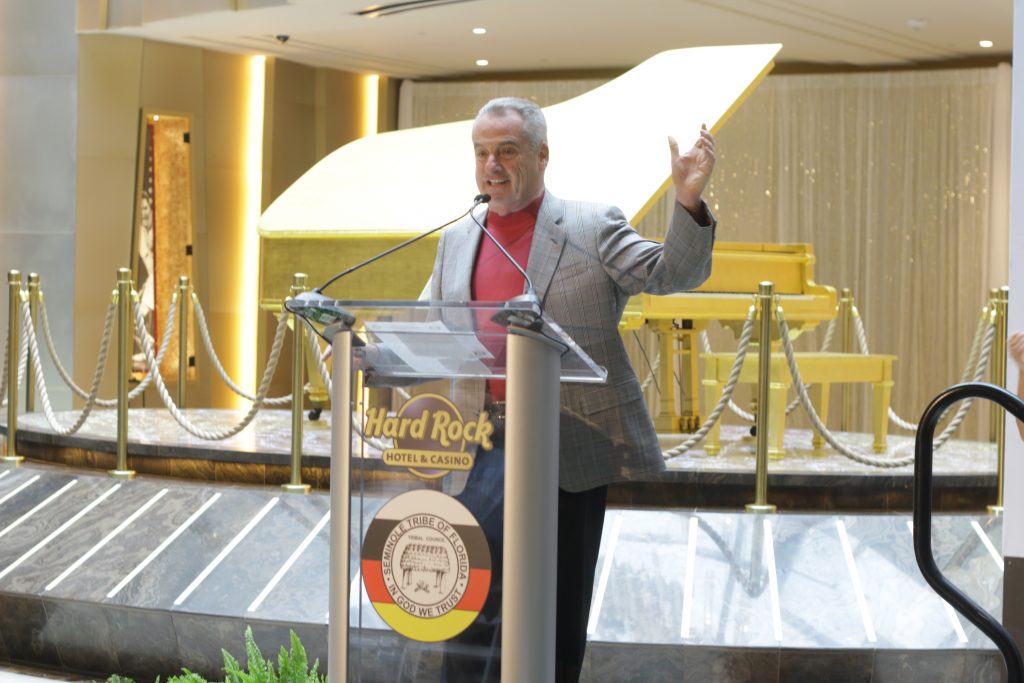 The completed 245,000-square-foot casino brings the new gaming experience to nearly 5,000 slots, 179 tables and a state-of-the-art poker room with 46 poker tables. For the ultimate VIP experience, the new hotel tower will feature a private gaming parlor, with exclusive check-in and private elevators.

Upon completion, a total of 14 restaurants and bars will keep hungry hearts happy, including the addition of Constant Grind, a casual sit down or grab and go hot spot; the Pool Bar & Grill, an upbeat, full service restaurant; and an Italian fine dining concept that will further elevate the property to true culinary destination status.

An upscale wine and spirits experience will join the retail offerings, presenting the opportunity to enjoy wine by the glass and sample featured wines available for purchase.  Additional retail concepts will feature jewelry, cosmetics, and men’s and women’s fashions.

Rooms are available to book now for resort stays beginning in mid-July.

Owned and operated by the Seminole Tribe of Florida, Seminole Hard Rock Hotel & Casino Tampa is one of the largest and most successful casinos in the world offering award-winning gaming, hospitality and entertainment. The casino features more than 4,000 of the hottest slot machines, 138 table games and a state-of-the-art Poker Room featuring 46 tables. Additionally, the property offers a smoke-free Mezzanine Level Casino. The hotel is AAA Four Diamond rated and the property proudly offers seven award-winning restaurants, including the upscale dining venues Council Oak Steaks & Seafood and The Rez Grill. Renovations and expansions set to debut in the fall of 2019 include a new hotel tower with over 500 rooms, three ultra-lavish pools and expansive gaming space. The property will also unveil a new Rock Spa® & Salon, meeting space, entertainment venue, arrival experience as well as new food and beverage options. The resort is located off I-4 at North Orient Road and Hillsborough Avenue, about 10 minutes east of downtown Tampa. For more information, please call 866-502-PLAY or visit us online and via Facebook, Twitter, Instagram and Pinterest.​