Fans who can’t make the Race but want to see the concerts at Hard Rock Live can purchase tickets at myhrl.com

MIAMI GARDENS, Fla., South Florida Motorsports (SFM) the promoter of the Formula 1® Crypto.com Miami Grand Prix and Hard Rock International are delighted to jointly announce the DJs and music acts that will perform across the race weekend at the inaugural event in Miami Gardens. The inclusion of all these artists will provide an amazing atmosphere to the race weekend and highlight Miami’s pre-eminence in the dance music scene.

“As founding partners of the Formula 1® Crypto.com Miami Grand Prix, it was imperative for us to infuse the race week experience with the world-class entertainment that Hard Rock is known for,” said Keith Sheldon, President of Entertainment for Hard Rock.  “With some of the top names in music and pop culture performing for the entire campus from the Hard Rock Beach Club stage, the inaugural race in South Florida will offer race fans unprecedented live music experiences.”

“We are delighted that some of the biggest music producers and DJs in the world will be providing the soundtrack to an incredible weekend of racing,” said Jeremy Walls, Senior Vice President, Chief Revenue Officer of Hard Rock Stadium & Formula 1® Crypto.com Miami Grand Prix. “It’s great that fans will hear the music from Post Malone, The Chainsmokers, Tiësto, Zedd and iHeartRadio DJs that are performing in Hard Rock Beach Club each day, in addition to Maluma who will deliver a special performance on the podium after the race.”

An epic weekend of live music begins at Hard Rock Beach Club on Friday via Hard Rock’s partnership with iHeartRadio, which will bring feature DJs to the set at noon. From Miami’s number one hit music station Y100, DJ Drew will get the party started followed by the Latin sounds of TU 94.9 as DJ Germain Rodriguez performs ahead of Xtreme.

Ahead of Formula 1® qualifying on Saturday afternoon, Grammy nominated global superstar, Post Malone – who also performs at Hard Rock Live at the Guitar Hotel at Seminole Hard Rock Hotel & Casino Hollywood on the night prior – will perform a few of his #1 records at the Miami International Autodrome. Rounding out the day’s entertainment is the award-winning DJ, record producer, and songwriter, Zedd.  Both megastars will broadcast live from Hard Rock Beach Club to the entire Campus.

Taking the stage on Sunday afternoon will be the Grammy Award-winning and international icon Tiësto who has been credited by Mixmag as “The Greatest DJ of All Time.” With over 36 million albums sold, Tiësto continues to revolutionize the dance music landscape.  Closing out the race festivities as the final headliner will be the world famous pop duo, The Chainsmokers. Their long-awaited fourth studio album, So Far So Good, is set to be released the week after the race and is expected to follow in the footsteps of their last album and top the Billboard Albums Chart when it debuts. They will bring the Formula 1® Crypto.com Miami Grand Prix party to an end on Sunday night.

The flavor of the music from Hard Rock Beach Club across the weekend will reflect Hard Rock’s connectivity with some of today’s most popular music acts, while integrating the huge Miami music scene which is famous for its beats and award-winning DJs and producers. The fusion of hip hop, dance and Latino sounds will culminate with Global Superstar Maluma who will perform on the podium on the south side of Hard Rock Stadium, once the Formula 1® drivers have received their winners’ trophies.  F1 fans will also have an opportunity to see Maluma at Hard Rock Live on the Thursday prior to race weekend at the Guitar Hotel at Seminole Hard Rock Hotel & Casino Hollywood. 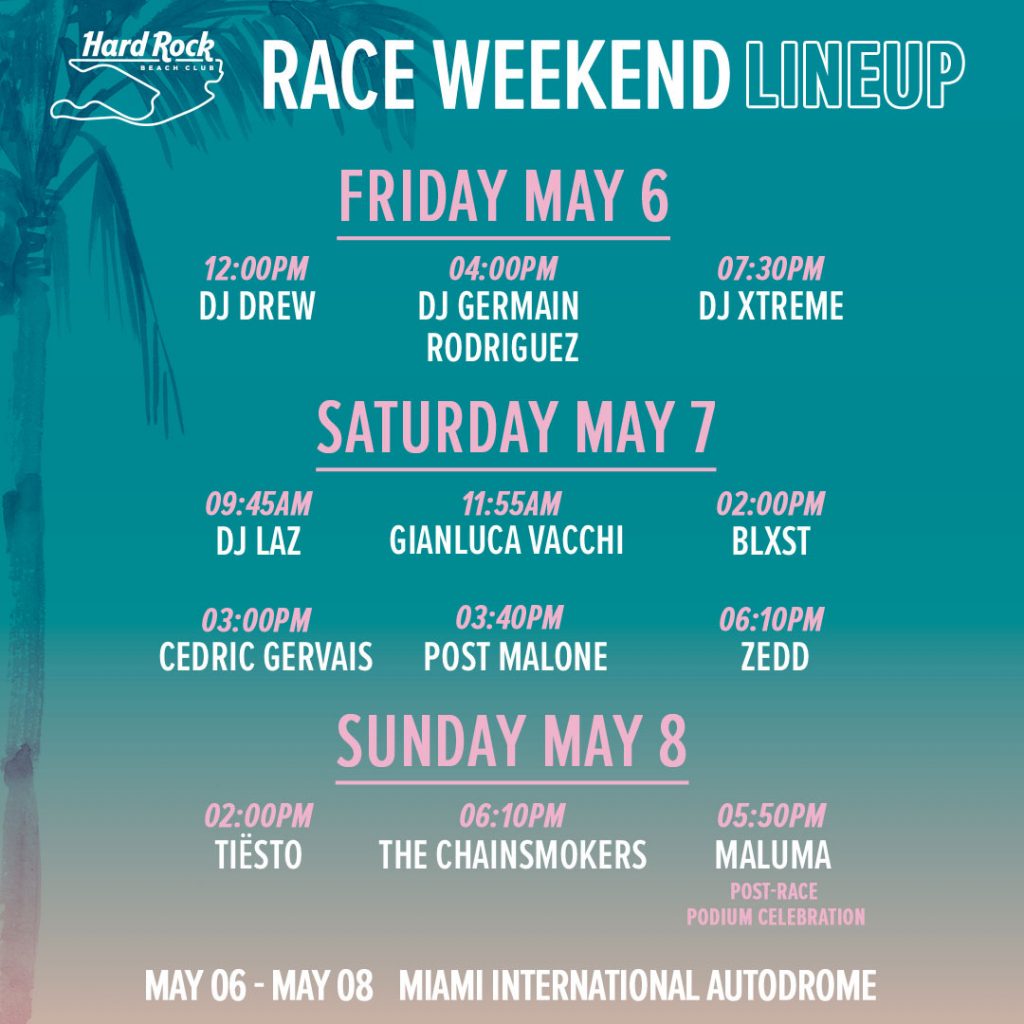 Scheduled to make its debut on 6-8 May, 2022, the Formula 1® Crypto.com Miami Grand Prix is the sport’s newest race on the Formula 1® calendar. Located in Miami Gardens, Florida, the world’s top drivers are set to compete on a brand-new circuit located within the complex of the Hard Rock Stadium, the home of the legendary Miami Dolphins NFL team. The 5.41km Miami International Autodrome features 19 corners, three straights and has an estimated top speed of 320km/h.

The race will also provide an additional tourist boost and economic impact to local businesses in the greater Miami region. Formula 1® and South Florida Motorsports are working closely with the local community to provide an allotment of discounted tickets for the residents of Miami Gardens, ensuring they have the opportunity to experience the thrill of the sport. Additionally, South Florida Motorsports have launched a programme to support both local businesses and the community to ensure they get the full benefits of the race being held in Miami Gardens. This includes a STEM education programme through F1 in Schools, as well as the opportunity for local restaurants to be part of the race weekend.

The FIA Formula 1® World ChampionshipTM was inaugurated in 1950, unifying the sport of Grand Prix motor racing as the world’s most prestigious motorsport competition. Through more than 70 years it has grown to become the world’s most popular annual sporting series. In 2016 it was watched by 400 million unique television viewers from over 200 territories. The 2021 season will run from March to December and spans 23 races in 21 countries. Formula 1® is a subsidiary of Liberty Media Corporation (NASDAQ: LSXMA, LSXMB, LSXMK, BATRA, BATRK, FWONA, FWONK) attributed to the Formula One Group tracking stock. For more information on Formula 1® visit: formula1.com

About Hard Rock®
Hard Rock International (HRI)  is one of the most globally recognized companies with venues in 68 countries spanning 253 locations that include owned/licensed or managed Hotels, Casinos, Rock Shops®, Live Performance Venues and Cafes. HRI also launched a joint venture named Hard Rock Digital in 2020, an online sportsbook, retail sportsbook and internet gaming platform. Beginning with an Eric Clapton guitar, Hard Rock owns the world’s largest and most valuable collection of authentic music memorabilia at more than 86,000 pieces, which are displayed at its locations around the globe. In 2021, Hard Rock was honored as one of Forbes Magazine’s Best Employers for Diversity, a Top Employer for Women and the Top Employer in the Travel & Leisure, Gaming, and Entertainment Industry. Hard Rock was also designated as a U.S. Best Managed Company by Deloitte Private and The Wall Street Journal and named the top performing hotel brand in J.D. Power’s North America Hotel Guest Satisfaction Study for the third consecutive year in 2021. The brand is owned by HRI parent entity The Seminole Tribe of Florida. For more information on Hard Rock International, visit www.hardrock.com or shop.hardrock.com.