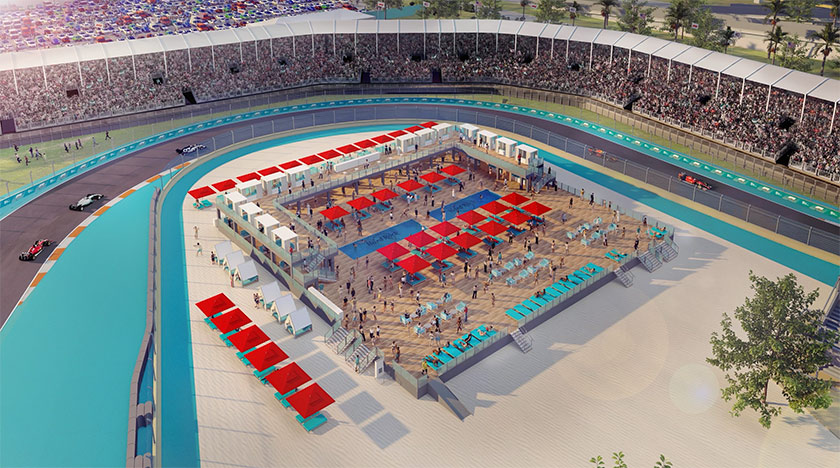 As a founding partner of the Formula 1® Crypto.com Miami Grand Prix, Hard Rock will have the unique opportunity to engage fans both onsite at the Miami International Autodrome and at Seminole Hard Rock Hotel & Casino Hollywood, home of the iconic Guitar Hotel. Part of the onsite activations for race weekend will include Hard Rock

Beach Club, which spans the area by turns 11, 12 and 13. A landmark feature of the campus, Hard Rock Beach Club will give guests a uniquely South Florida environment to enjoy all of the racing action, including a nearly 24,000 square-foot beach, resort-style pools and two levels of luxury cabanas plus special musical performances.

Located just 15 minutes from the Miami International Autodrome, Seminole Hard Rock Hotel & Casino Hollywood will host the official kick-off party for race weekend on Thursday, May 5 and the official after parties of the Formula 1® Crypto.com Miami Grand Prix weekend. Known for its world-class entertainment, Hard Rock will bring globally recognized superstar acts to celebrate the inaugural race in Miami. A complete entertainment schedule across all Hard Rock venues will be announced at a later date.

To celebrate this special partnership, Hard Rock created a custom-made Formula 1® Crypto.com Miami Grand Prix light show theme on the façade of The Guitar Hotel. In a moment of connection across the city, both The Guitar Hotel and Hard Rock Stadium were illuminated in Formula 1® Crypto.com Miami Grand Prix colors and imagery. Video and photos of this unique moment, as well as renderings of Hard Rock Beach Club, are available to view and download here.

“Hard Rock is proud to partner with the Formula 1 Crypto.com Miami Grand Prix on this international event,” said Jim Allen, Chairman of Hard Rock International. “With venues in 70 countries around the world, we welcome the spotlight right here in South Florida where our flagship Guitar Hotel is located.”

Scheduled to make its debut on 6-8 May, 2022, the Formula 1® Crypto.com Miami Grand Prix is the sport’s newest race on the Formula 1® calendar. Located in Miami Gardens, Florida, the world’s top drivers are set to compete on a brand-new circuit located within the complex of the Hard Rock Stadium, the home of the legendary Miami Dolphins NFL team. The 5.41km Miami International Autodrome features 19 corners, three straights and has an estimated top speed of 320km/h.

The race will also provide an additional tourist boost and economic impact to local businesses in the greater Miami region. Formula 1® and South Florida Motorsports are working closely with the local community to provide an allotment of discounted tickets for the residents of Miami Gardens, ensuring they have the opportunity to experience the thrill of the sport. Additionally, South Florida Motorsports have launched a programme to support

both local businesses and the community to ensure they get the full benefits of the race being held in Miami Gardens. This includes a STEM education programme through F1 in Schools, as well as the opportunity for local restaurants to be part of the race weekend.

Hard Rock International (HRI)  is one of the most globally recognized companies with venues in 70 countries spanning 253 locations that include owned/licensed or managed Hotels, Casinos, Rock Shops®, Live Performance Venues and Cafes. HRI also launched a joint venture named Hard Rock Digital in 2020, an online sportsbook, retail sportsbook and internet gaming platform. Beginning with an Eric Clapton guitar, Hard Rock owns the world’s largest and most valuable collection of authentic music memorabilia at more than 86,000 pieces, which are displayed at its locations around the globe. In 2021, Hard Rock was honored as one of Forbes Magazine’s Best Employers for Diversity, a Top Employer for Women and the Top Employer in the Travel & Leisure, Gaming, and Entertainment Industry. Hard Rock was also designated as a U.S. Best Managed Company by Deloitte Private and The Wall Street Journal and named the top performing hotel brand in J.D. Power’s North America Hotel Guest Satisfaction Study for the third consecutive year in 2021. The brand is owned by HRI parent entity The Seminole Tribe of Florida. For more information on Hard Rock International, visit www.hardrock.com or shop.hardrock.com.

The FIA Formula 1® World ChampionshipTM was inaugurated in 1950, unifying the sport of Grand Prix motor racing as the world’s most prestigious motorsport competition. Through more than 70 years it has grown to become the world’s most popular annual sporting series. In 2016 it was watched by 400 million unique television viewers from over 200 territories. The 2021 season will run from March to December and spans 23 races in 21 countries. Formula 1® is a subsidiary of Liberty Media Corporation (NASDAQ: LSXMA, LSXMB, LSXMK, BATRA, BATRK, FWONA, FWONK) attributed to the Formula One Group tracking stock. For more information on Formula 1® visit: formula1.com