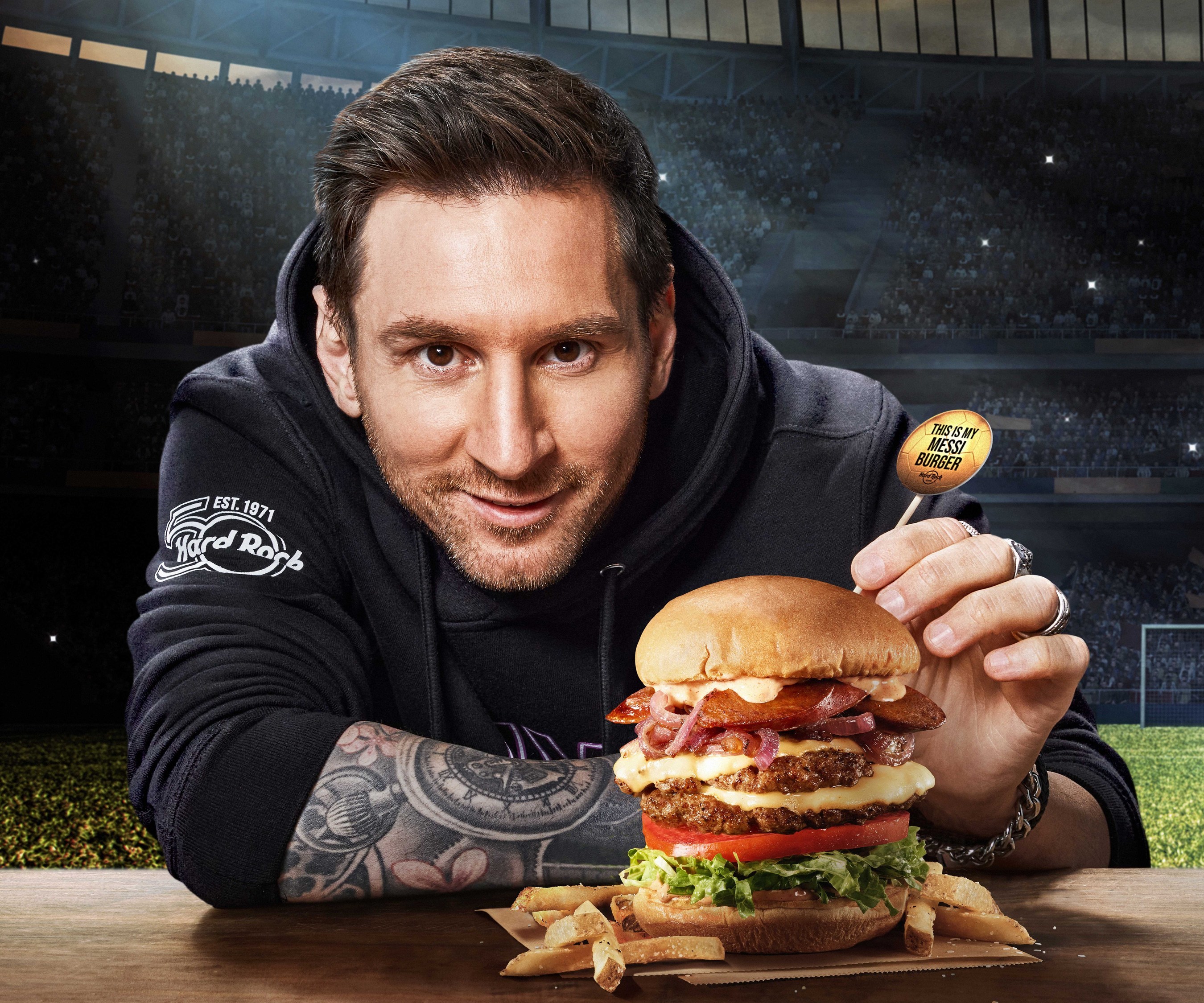 The Messi Burger includes ten flavorful ingredients for a game-changing take on Hard Rock’s Legendary Steak Burger. As Hard Rock and Messi fans bite into the burger, they’ll taste a juicy double stack of the finest ground beef patties, seasoned, and seared to perfection. Tastebuds score big with the burger’s winning combination of toppings: provolone cheese, sliced chorizo, caramelized red onion, and Hard Rock’s signature, spicy, smoky sauce served on a toasted brioche bun with shredded romaine lettuce and vine-ripened tomato. If you want to get really MESSI, try the burger topped with a fried egg for a small fee.

“It is an honor to take our partnership with world-renowned soccer star, Lionel Messi, and the LIVE GREATNESS campaign to the next level with his very own take on Hard Rock Cafe’s Legendary Steak Burger,” said Jon Lucas, COO of Hard Rock International. “We are excited to welcome Hard Rock and Messi fans to our turf to try the burger inspired by Messi’s very own favorites for a unique and unforgettable experience.”

Hard Rock Cafe is an internationally recognized, world-class hospitality brand that operates cafes around the world, which are visited by millions of guests annually. The first Hard Rock Cafe opened in London, England in 1971. From there the brand has expanded to major cities such as New York City, Los Angeles, Chicago, Miami, Paris, Sydney and more. Hard Rock Cafe offers a one-of-a-kind dining experience with a commitment to serving fresh, high-quality ingredients. To satisfy the consumer’s ever-changing palate, Hard Rock continually updates its menu with limited-time offerings including burger pairings, innovative cocktails and more.

About LIVE GREATNESSIn 2021, Messi teamed with Hard Rock for the brand’s LIVE GREATNESS campaign, an initiative built on the fan-focused principles that have guided Hard Rock since the opening of its first Cafe location in London in 1971 and aiming to inspire fans while calling on them to unite under their love for the iconic entertainment and hospitality brand.

The collaboration pays homage to Hard Rock’s roots, as the brand’s world-famous T-shirts came about when the original Hard Rock Cafe London sponsored a local soccer team in the 1970s. Hard Rock and Messi have come together to unveil a new collection of merchandise, which includes some of Messi’s iconic symbols such as the number 10, the lion, and his own logo.

Details on LIVE GREATNESS can be found here, and additional assets surrounding Hard Rock’s partnership with Messi here. All merchandise from the collaboration between Hard Rock and Lionel Messi is available in stores and online.

About Hard Rock®:Hard Rock International (HRI) is one of the most globally recognized companies with venues in 68 countries spanning 253 locations that include owned/licensed or managed Hotels, Casinos, Rock Shops®, Live Performance Venues and Cafes. HRI also launched a joint venture named Hard Rock Digital in 2020, an online sportsbook, retail sportsbook and internet gaming platform. Beginning with an Eric Clapton guitar, Hard Rock owns the world’s largest and most valuable collection of authentic music memorabilia at more than 86,000 pieces, which are displayed at its locations around the globe. In 2021, Hard Rock was honored as one of Forbes Magazine’s Best Employers for Diversity, a Top Employer for Women and the Top Employer in the Travel & Leisure, Gaming, and Entertainment Industry. Hard Rock was also designated as a U.S. Best Managed Company by Deloitte Private and The Wall Street Journal and named the top performing hotel brand in J.D. Power’s North America Hotel Guest Satisfaction Study for the third consecutive year in 2021. The brand is owned by HRI parent entity The Seminole Tribe of Florida. For more information on Hard Rock International, visit www.hardrock.com or shop.hardrock.com.