“The Golden Solo” is Powered by the Ingredients of Hard Rock Cafe’s 24-Karat Gold Leaf Steak Burger™, the Star of the Brand’s New Menu that Launches Around the World Tomorrow

Move over Justin, Lizzo and Ed, the song of the summer is here and it’s already racking up awards! To celebrate tomorrow’s launch of Hard Rock Cafe’s most extensive menu innovation in company history, the brand today released what is sure to be the summer’s biggest hit, “The Golden Solo,” a legendary guitar solo embracing the inner spirit of the Hard Rock brand, played on the world’s first, playable burger guitar.

The one-of-a-kind guitar was crafted by famed guitar maker James Trussart, whose rock star clientele includes Bob Dylan, Keith Richards, Paul Simon, Eric Clapton, Charlie Sexton, The Roots and Mick Jagger. The patent-pending instrument is powered by Hard Rock Cafe’s 24-Karat Gold Leaf Steak Burger™ and uses the player’s body to provide a unique electrical current through the burger, similar to picking the strings of a guitar. Through a single-board micro-controller that was wired into the digital guitar’s circuitry, the player’s body completes a circuit within the processor to produce sound. The guitar manipulates electrical currents from the 24-Karat Gold Leaf Steak Burger’s™ ingredients into audio tones, so that strings of the guitar can be played and create a beautiful melody. Music and burger fans can visit https://www.hardrockcafe.com/golden-solo.aspx to hear “The Golden Solo”, see the “Golden Solo” video and see photos of the 24-Karat Gold Leaf Steak Burger™ guitar.

“I’ve built guitars for more legendary rock stars than I can count but never a guitar for a legendary burger. It was a totally different kind of challenge and an honor to work on. The burger, of course, was delicious,” said James Trussart, the creator of the 24-Karat Gold Leaf Steak Burger ™ guitar.

Just like the strings of a guitar must be perfectly tuned to play a great melody, every detail matters when building the best burger. “The Golden Solo” is played with Hard Rock Cafe’s first-of-its-kind 24-Karat Gold Leaf Steak Burger™, a ½-lb fresh Steak Burger topped with 24-Karat edible gold leaf, Tillamook cheddar cheese, leaf lettuce, vine-ripened tomato and red onion. Through the Hard Rock Heals Foundation, a portion of all proceeds from the 24-Karat Gold Leaf Steak Burger™ will benefit Action Against Hunger to assist in the fight against world hunger. 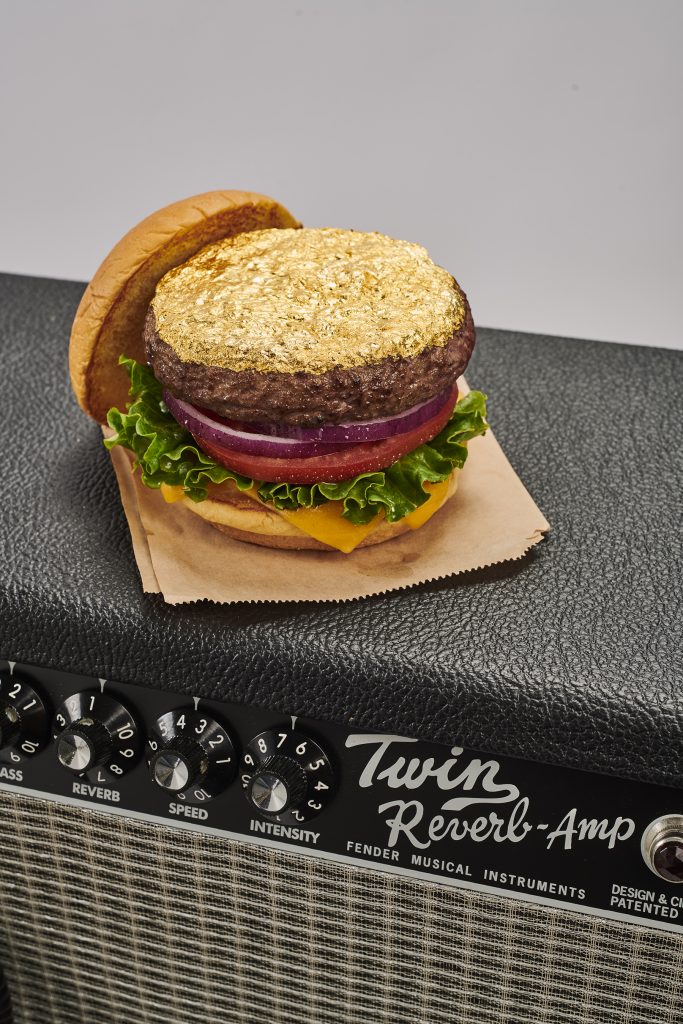 “At Hard Rock Cafe, we have no greater passions than food, music and our guests. ‘The Golden Solo’ brings together food and music in a unique way that truly embodies our brand and adds fun to our guest experience,” said Stephen K. Judge, President of Cafe Operations at Hard Rock International. “As we launch the most extensive menu innovation in Hard Rock Cafe’s history, ‘The Golden Solo’ gives our fans yet another way to see, taste and hear all that Hard Rock Cafe has to offer.”

Today’s release of “The Golden Solo” coincides with the launch of Hard Rock Cafe’s exciting new menu, which features more than 20 innovative offerings, debuting tomorrow in locations around the world. The iconic restaurant’s new menu puts the spotlight on its lineup of all-new, award-winning Steak Burgers, created with a proprietary beef blend in partnership with Pat LaFrieda Meat Purveyors to produce the most flavorful burger possible. The brand’s signature Steak Burger has already collected awards ahead of its global launch, including accolades such as “Fan Favorite” at the 2019 Riverwalk Fort Lauderdale Burger Battle, “Best Burger” in the 2019 Porthole Cruise Editor-in-Chief Awards and “Ultimate Winner/Best in Miami” at the 2018 Miami Times Burgerfest. Additional new offerings include Instagram-worthy Boozy Milkshakes, Sliders and Shareables that encourage adventure and exploration, allowing fans to curate their most flavorful playlist.