The renowned brands kicked off the partnership with a special event in Athens, the home of the luxury resort, casino and entertainment venue set to open in 2026

June 23, 2022/ATHENS, GR – Hard Rock International and GEK TERNA Group held a special event in Athens yesterday signaling the official start of their partnership for the construction and operation of an integrated resort and casino, located in the iconic area of the Athens Riviera, within the context of “The Ellinikon” development. Hard Rock Hotel & Casino Athens, which is set to open in 2026, will be a unique destination in Europe combining a five-star luxury hotel, a world class gaming floor, a premier meeting and convention space, a state-of-the-art entertainment venue, internationally renowned food and beverage, luxurious Rock® Spa and Pool Complex, and a high-end retail promenade.

“We are thrilled to announce the partnership with GEK TERNA Group and further expand Hard Rock’s reach across the globe in the great City of Athens,” said Jim Allen, Hard Rock International Chairman. “This development will bring over 3,000 permanent jobs to the people of Greece and we look forward to bring our unique brand of entertainment and provide an unparalleled experience for guests of all ages.” 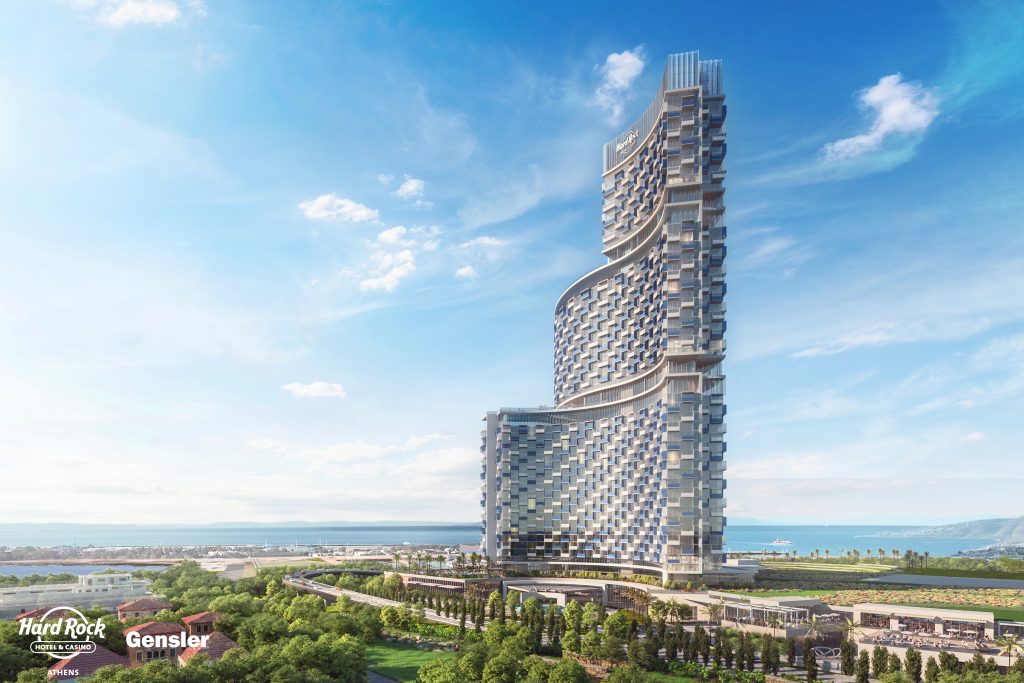 “This development will create a premium tourism spot, expected to offer employment to thousands of people, yield significant revenues to the public sector, and add value to Greece’s brand” said George Peristeris, Chairman and CEO of GEK TERNA Group. “Along with Hard Rock we are realizing a private investment of over 1 billion euros, reaffirming our trust in Greece’s prospects and potential.”

The design of the project draws its inspiration from basic Greek elements such as the sea, the arts and ancient mythology, which it combines with the modern requirements of architecture and the inescapable need for harmonious integration of the project in its environment and location. Open spaces, gardens and water features are key elements of the project’s design, with total green open space covering close to 205,000 m2.

The central Tower draws its inspiration from nautical references, incorporating in its design the waves, the sails and the lighthouse. Built on three levels, the Tower has three different orientations corresponding to the reference points located within the imaginary triangle that is formed around the project: the Acropolis, the sea and Mount Hymettus. Its iconic shape will serve as a symbol of the region and reference the importance of the connection between land, sea and sky.

Hard Rock Hotel & Casino Athens will be an international destination, offering its visitors an exciting mix of entertainment, food and beverage and accommodations, embracing the Mediterranean climate and providing special outdoor spaces.

The development brings a vibrant casino of just under 15,000 m2, comprising of 200 tables and 2,000 gaming machines. The Tower consists of more than 1,000 guest rooms and suites, totaling almost 3,500 beds overlooking the waterfront or views across Athens to the Parthenon. The project also includes the highest outdoor rooftop terrace in Athens, with a rooftop pool deck that consists of Bars, the Rock® Spa and Body Rock Fitness, celebrating the year-around sunshine and pleasant temperatures with indoor-outdoor connections.

The Hard Rock Live’s theater is designed to entertain audiences of 3,000, while the stage extends to the exterior for outdoor festivals and concerts with an additional 7,500 seats. Inspired by the ancient Greek amphitheater, the outdoor lawn is bringing together culture and entertainment, harmonically bridging the Hard Rock brand with the Greek lifestyle.

An outdoor village with a variety of retail, high-end local and international restaurants, dinning terraces and bar and lounge spaces encompasses the casino, while the conference and exhibition center which exceed 23,000 m2, provide a large expo hall, ball rooms, meeting areas and support spaces.

The 30-year concession is a partnership between Hard Rock International (51%) and GEK TERNA Group (49%), with the latter being also responsible for the entire construction of the project, which is expected to begin within the first months of 2023 and last close to 3 years, setting the opening of Hard Rock Hotel & Casino Athens in 2026.

Hard Rock International (HRI)  is one of the most globally recognized companies with venues in over 70 countries spanning 265 locations that include owned/licensed or managed Rock Shops®, Live Performance Venues and Cafes. HRI also launched a joint venture named Hard Rock Digital in 2020, an online sportsbook, retail sportsbook and internet gaming platform. Beginning with an Eric Clapton guitar, Hard Rock owns the world’s largest and most valuable collection of authentic music memorabilia at more than 86,000 pieces, which are displayed at its locations around the globe. In 2022, Hard Rock was honored as one of Forbes Magazine’s Best Employers for Diversity and a Top Large Employer in the Travel & Leisure, Gaming, and Entertainment Industry. Deloitte Private and The Wall Street Journal also designated Hard Rock as a U.S. Best Managed Company for the second year in a row in 2022. In 2021, Hard Rock was ranked top performing hotel brand in J.D. Power’s North America Hotel Guest Satisfaction Study for the third consecutive year and named Forbes Magazine’s Top Employers for Women. The brand is owned by HRI parent entity The Seminole Tribe of Florida. For more information on Hard Rock International, visit www.hardrock.com or shop.hardrock.com.

About GEK TERNA Group:
GEK TERNA Group is one of the leading and most extrovert Greek business Groups, with a significant presence abroad. With 3,500 employees worldwide, and total investments of more than €2.3 bn during the recent years, GEK TERNA actively supports the Greek economy, continuing its growth path with the same commitment and creativity. The Group has a leading position in the fields of infrastructure, energy production, supply and trade from thermal sources and RES, concessions, waste management and real estate development & management. GEK TERNA Group has a significant construction backlog, which along with the projects to be signed amounts to 4.9 billion euros, while the total investments implemented by the Group or in which the Group participates, currently exceeding 6.5 billion Euros. GEK TERNA (www.gekterna.com) is listed in the Athens Stock Exchange (FTSE / Athex Large Cap).