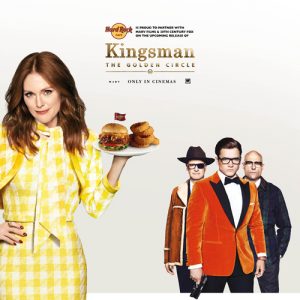 This fall, guests can combat hunger at Hard Rock Cafe by sinking their teeth into a blockbuster-inspired burger offered in partnership with MARV Films & Twentieth Century Fox. In celebration of the upcoming release, Kingsman: The Golden Circle, Hard Rock is offering the new Poppy Burger at select locations around the world now through Friday, October 6, 2017. The Poppy Burger is a dangerously delicious take on the man-made burger prepared by the motion picture’s villain, Poppy, played by Julianne Moore.

“As godson to Hard Rock Cafe’s co-founder, Peter Morton, you can certainly say that I’ve always been a fan of the Hard Rock brand,” said Matthew Vaughn, Film Director and Producer of the Kingsman Series. “My first job was a bus boy in the Hard Rock Cafe and it is a brand that I will always love for the fond memories it gave me. I feel privileged they are now my partners.”

While sinfully enjoyable, in no way is this burger made with Poppy’s preferred ingredients! Hard Rock’s limited-time menu item begins with a juicy a half-pound burger patty, seasoned with BBQ spices, topped with pulled brisket in a bourbon whiskey glaze and finished with melted cheddar cheese. All served on a toasted sesame seed bun brushed with garlic aioli and Golden Circles (onion rings) on the side, this burger is sure to impress both food and movie critics!

“Thanks to director, producer and long-time Hard Rock fan, Matthew Vaughn, Hard Rock’s latest collaboration is one of our most exciting and we are honored to work with such an incredible film,” said Stephen Judge, President of Cafe Operations at Hard Rock International. “The limited-time Poppy Burger allows fans to take their love for the film to the next level, and is the perfect excuse for dinner and a movie.”