As a founding partner of Formula 1® Crypto.com Miami Grand Prix, Hard Rock International is bringing globally recognized superstars to celebrate the inaugural race in Miami at both the Miami International Autodrome and at Seminole Hard Rock Hotel & Casino Hollywood, the brand’s flagship resort and home of the iconic Guitar Hotel. Maluma is the first of several A-list entertainers announced who are scheduled to perform during race weekend.

Tickets go on sale Friday, March 18 at 10 a.m. ET and start at $105. Tickets are available at www.myhrl.com. Fans can access venue presale on Wednesday, March 16 at 10 a.m. ET via Seminole Hard Rock Hollywood’s Facebook and Twitter pages. Doors open one hour prior to show time.

In addition to the concert experience at Hard Rock Live, Maluma is slated to make an appearance at Hard Rock Beach Club at the Miami International Autodrome during race weekend. Spanning the area by turns 11, 12 and 13, Hard Rock Beach Club is a highlight of the track that will give guests a uniquely South Florida environment to enjoy all of the race action with a 24,000 square-foot beach, resort-style pools and two levels of luxury cabanas. 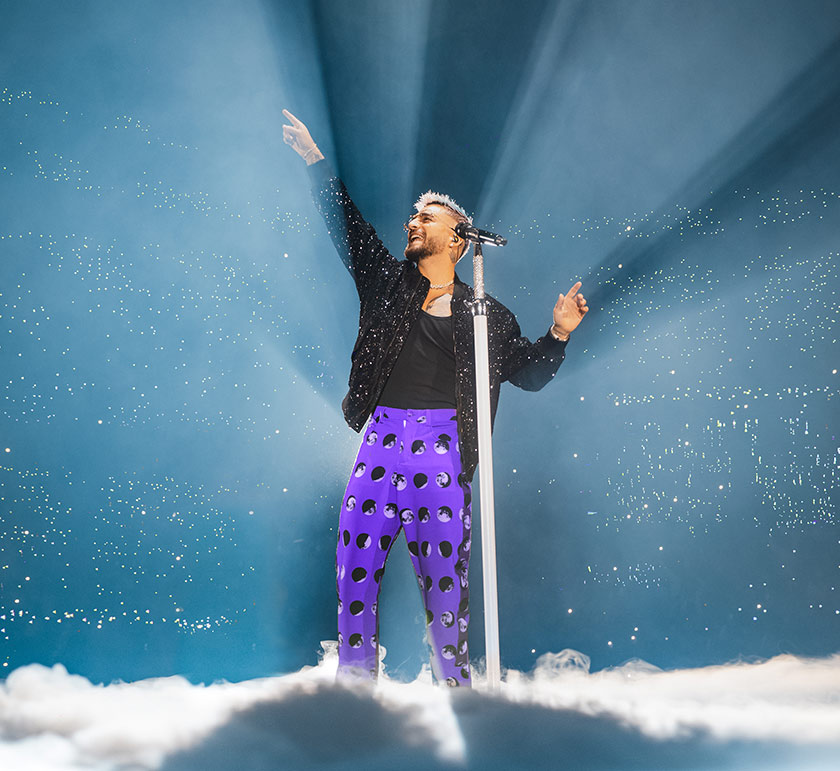 Juan Luis Londoño Arias, best known as Maluma, from Medellin, Colombia, has become a global Latin music idol. At only 28 years old, the Colombian superstar has a repertoire of smash hits and music collaborations with artists such as Madonna, Shakira, The Weeknd, Timbaland, Jason Derulo and Ricky Martin, among many others. He has recorded five albums: “Pretty Boy Dirty Boy” (2015), “F.A.M.E.” (2018 Latin Grammy winner for Best Contemporary Pop Vocal Album), “11:11” (2019), “Papi Juancho” (2020) which includes the worldwide hit “Hawái,” and “7 Días en Jamaica” (#7DJ).

Maluma is a media leader due to his high impact on social media with more than 93 million active followers. He is the youngest artist with a total of 21 No.1 hits on Billboard’s Latin Airplay chart, and if that weren’t enough, he has conquered Latin America, the United States, Europe, Asia and the Middle East with his live concerts, breaking records with sold out shows in stadiums and arenas throughout the world.

His passion for haute couture has led him to be an ambassador for luxury brands such as Versace and to co-design a special line with Balmain. In addition Maluma’s altruistic spirit is outstanding for the community work he leads with his foundation “El Arte de Los Sueños” based in his native country. Founded in 2016, the Foundation’s mission is to transform at-risk youth through art and music education bringing an inspiring message to young people.

In November 2021, Maluma starred in his first Disney animation movie, “Encanto,” which is nominated for a 2022 Oscar this year and was nominated by the Golden Globes. This 2022 the global superstar is back with his “Papi Juancho Maluma World Tour 2022” and debuted in Hollywood with his starring role as Bastian in the movie “Marry Me” alongside Jennifer Lopez and Owen Wilson. He also collaborated with Jennifer Lopez on the film’s soundtrack. For more information visit: https://maluma.online/ and follow him on all social media platforms as @maluma.

Hard Rock International (HRI)  is one of the most globally recognized companies with venues in 68 countries spanning 253 locations that include owned/licensed or managed Hotels, Casinos, Rock Shops®, Live Performance Venues and Cafes. HRI also launched a joint venture named Hard Rock Digital in 2020, an online sportsbook, retail sportsbook and internet gaming platform. Beginning with an Eric Clapton guitar, Hard Rock owns the world’s largest and most valuable collection of authentic music memorabilia at more than 86,000 pieces, which are displayed at its locations around the globe. In 2021, Hard Rock was honored as one of Forbes Magazine’s Best Employers for Diversity, a Top Employer for Women and the Top Employer in the Travel & Leisure, Gaming, and Entertainment Industry. Hard Rock was also designated as a U.S. Best Managed Company by Deloitte Private and The Wall Street Journal and named the top performing hotel brand in J.D. Power’s North America Hotel Guest Satisfaction Study for the third consecutive year in 2021. The brand is owned by HRI parent entity The Seminole Tribe of Florida. For more information on Hard Rock International, visit www.hardrock.com or shop.hardrock.com.