As a founding partner of Formula 1® Crypto.com Miami Grand Prix, Hard Rock International is bringing globally recognized superstars to celebrate the inaugural race in Miami at both the Miami International Autodrome and at Seminole Hard Rock Hotel & Casino Hollywood, the brand’s flagship resort and home of the iconic Guitar Hotel. Post Malone joins the line-up of A-list entertainers announced who are scheduled to perform during race weekend.

Tickets go on sale Friday, April 8 at 10 a.m. ET and start at $105. Tickets are available at www.myhrl.com. Fans can access venue presale on Wednesday, April 6 at 10 a.m. ET via Seminole Hard Rock Hollywood’s Facebook and Twitter pages. Doors open one hour prior to show time.

In addition to the concert experience at Hard Rock Live, Post Malone is slated to make an appearance at Hard Rock Beach Club at the Miami International Autodrome during race weekend. Spanning the area by turns 11, 12 and 13, Hard Rock Beach Club is a highlight of the track that will give guests a uniquely South Florida environment to enjoy all of the race action with a 24,000-square-foot beach, resort-style pools and two levels of luxury cabanas. 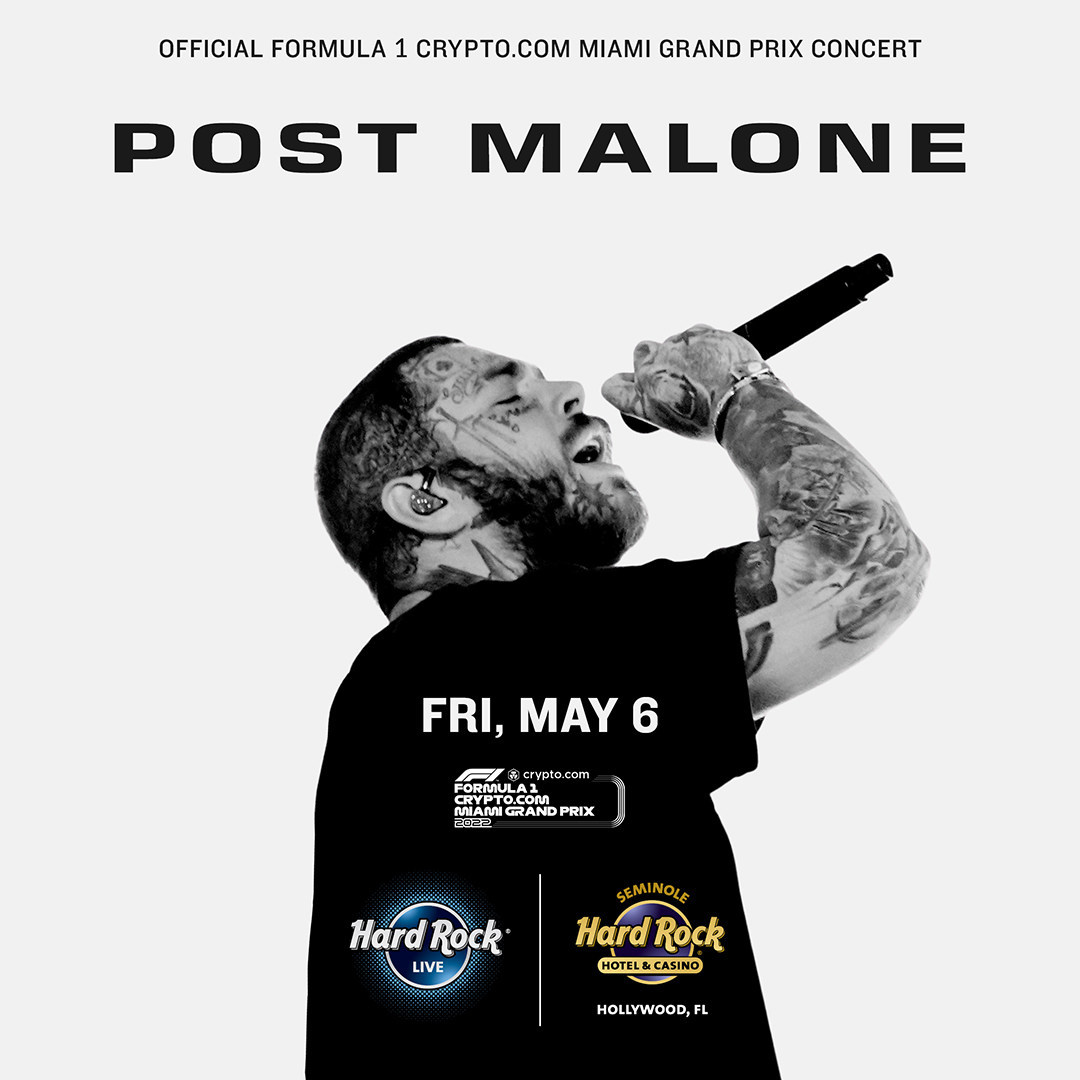 Three-time Diamond-certified, Dallas artist Post Malone emerged in 2015 with a genre-less brew that inspired a movement, delivering multiple No.1 debuts. His 2019’s “Hollywood’s Bleeding” arrived with Platinum status and eventually went on to go triple-Platinum, following the immense success of the triple-Platinum “Beerbongs & Bentleys,” which also debuted at No.1 a year prior. In the wake of “Beerbongs & Bentleys,” Post crushed a record that was in place for 54 years. He charted nine songs in the Top 20 of the Hot 100, making him the artist with the most songs on that list ever. Moreover, he also beat the record for most simultaneous Top 40 Hot 100 hits with 14.

His catalog comprises of the GRAMMY® Award-nominated records “Circles” (four-time Platinum), “rockstar” [feat. 21 Savage” (Diamond), “Sunflower (Spider-Man: Into The Spider-Verse)” [feat. Swae Lee] (Diamond) and “Congratulations” [feat. Quavo] (Diamond), and much more. Post kicks off his next era and paves the way for his fourth full-length album with the blockbuster single “One Right Now” [with The Weeknd].

About Hard Rock® Hard Rock International (HRI) is one of the most globally recognized companies with venues in 68 countries spanning 253 locations that include owned/licensed or managed Hotels, Casinos, Rock Shops®, Live Performance Venues and Cafes. HRI also launched a joint venture named Hard Rock Digital in 2020, an online sportsbook, retail sportsbook and internet gaming platform. Beginning with an Eric Clapton guitar, Hard Rock owns the world’s largest and most valuable collection of authentic music memorabilia at more than 86,000 pieces, which are displayed at its locations around the globe. In 2021, Hard Rock was honored as one of Forbes Magazine’s Best Employers for Diversity, a Top Employer for Women and the Top Employer in the Travel & Leisure, Gaming, and Entertainment Industry. Hard Rock was also designated as a U.S. Best Managed Company by Deloitte Private and The Wall Street Journal and named the top performing hotel brand in J.D. Power’s North America Hotel Guest Satisfaction Study for the third consecutive year in 2021. The brand is owned by HRI parent entity The Seminole Tribe of Florida. For more information on Hard Rock International, visit www.hardrock.com or shop.hardrock.com.