HOLLYWOOD, Fla., Nov. 16, 2021 /PRNewswire/ — On Monday, Nov. 15, Seminole Hard Rock Hotel & Casino Hollywood celebrated surpassing $1 billion in jackpots awarded in 2021 and one lucky winner received a grand prize. At 10 a.m. today, Sergio Montoya from Miami, Fla. was surprised with $100,000 cash after hitting a jackpot. Joining the celebration was Pro Football Hall of Famer and Miami Dolphins legend Jason Taylor who was on site to congratulate the winner. 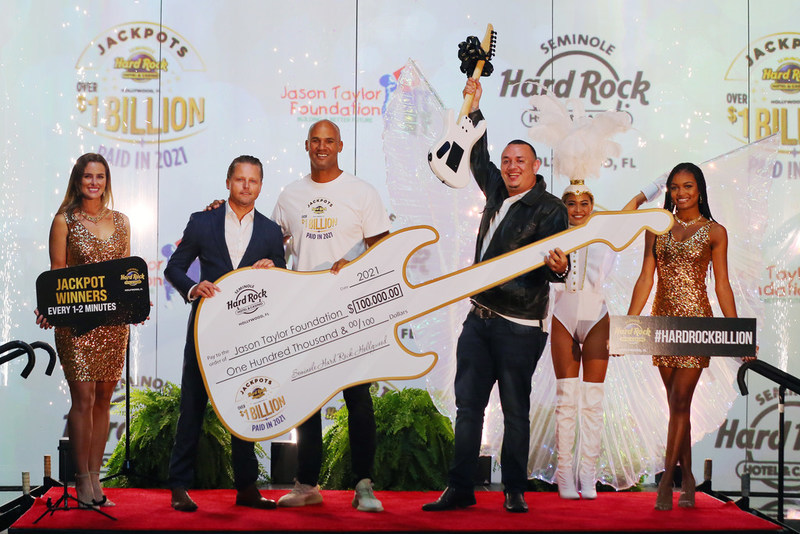 In addition to the $100,000 cash prize, Montoya also received a Live Like a Rock Star hotel package. The package includes a three-night stay for two in an exclusive swim-up suite in Oasis Tower at Seminole Hard Rock Hollywood, a Bora Bora cabana experience at The Guitar Hotel pool and $1,500 in resort credit to spend at the integrated resort’s award-winning restaurants, full-service Rock Spa & Salon, retail shops and other amenities.

Adding on to the festivities, Seminole Hard Rock Hollywood also surprised Jason Taylor with a $100,000 donation to the Jason Taylor Foundation.

“It is unexpected but very much appreciated,” said Taylor. “Seminole Hard Rock Hollywood has always been a partner to the Jason Taylor Foundation. When things were tight during the pandemic, not only did they step up, but they gave more. They always find a way to prop us up and help us succeed.”

The Jason Taylor Foundation supports and creates programs that facilitate the personal growth and empowerment of South Florida’s children in need by focusing on improved health care, education and quality of life.

As part of the celebration, all slot players who had their Seminole Wild Card properly inserted at the time of the winner’s jackpot won $100 in Bonus Free Play.

Seminole Hard Rock Hollywood has awarded more than 340,000 jackpots thus far in 2021, which equates to nearly one jackpot per minute.

“We are proud to have awarded more than $1 billion in jackpots before the end of the year,” said Justin Wyborn, assistant general manager of Seminole Hard Rock Hotel & Casino Hollywood. “As the premier entertainment destination in South Florida, we are constantly striving to provide guests with the ultimate experience, not only on the gaming floor, but throughout the property as a whole.”