The Royal Family of Music – the Jacksons – are featured prominently throughout the property. The impressive 37-foot-tall guitar marquee at the entrance to the building is modeled after Joseph Jackson’s famous guitar that changed the world and was the start of the Jackson 5. Upon entering the casino, guests are greeted by a spectacular guitar chandelier artwork modeled after that same guitar. The expansive Hard Rock Casino Northern Indiana is all on one level much like the Las Vegas casinos. The casino floor has 150,000 square feet dedicated to gaming, which includes blackjack, roulette, and craps, along with slot machines and video poker. There is a special baccarat area, an exclusive high limit room, Pai Gow poker and Spanish 21.

There are more than 170 pieces of music memorabilia on display inside the brand-new Hard Rock Casino Northern Indiana representing a wide range of genres. The epicenter of the story told by the memorabilia is the Jackson’s. From where it all started in Gary, Indiana with Joe Jackson’s storied guitar, to outfits worn on stage by family members, and items with a more individualized connection – Janet Jackson’s suit from her Velvet Rope tour, Michael’s iconic glove and THE red leather jacket from the Beat It video – which endures as one of the most recognizable pieces of fashion in music history. The Jackson collection totals over 30 pieces, and from there the memorabilia journey goes on to showcase artists influenced by this legendary family including Lady Gaga, Eddie Van Halen, Elvis Presley, Justin Timberlake, Madonna, Mariah Carey, Pharrel, Shakira and Fergie. In addition to the Jackson related memorabilia, will be items from other Gary, Indiana music icons including Jimmy Reed, Deniece Williams, Kym Mazelle, Crystal Taliefero, and Big Daddy Kinsey. 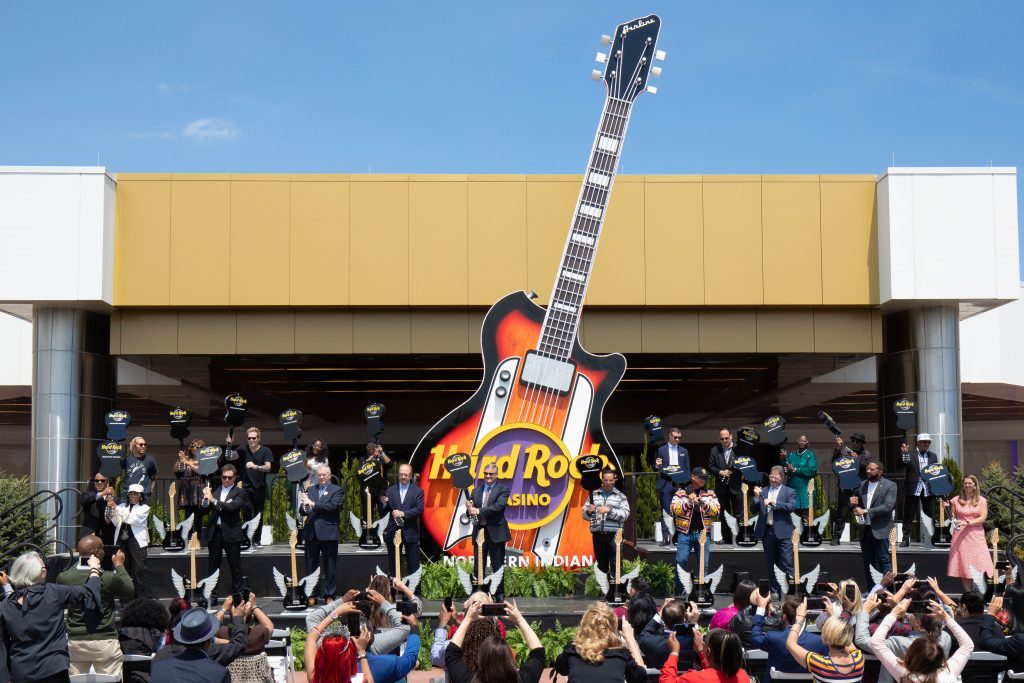 Hard Rock International (HRI) is one of the most globally recognized companies with venues in 68 countries spanning 239 locations that include owned/licensed or managed Hotels, Casinos, Rock Shops®, Live Performance Venues and Cafes. HRI also launched a joint venture named Hard Rock Digital in 2020, an online sportsbook, retail sportsbook and internet gaming platform. Beginning with an Eric Clapton guitar, Hard Rock owns the world’s largest and most valuable collection of authentic music memorabilia at more than 86,000 pieces, which are displayed at its locations around the globe. The brand is owned by HRI parent entity The Seminole Tribe of Florida. For more information on Hard Rock International, visit www.hardrock.com or shop.hardrock.com.